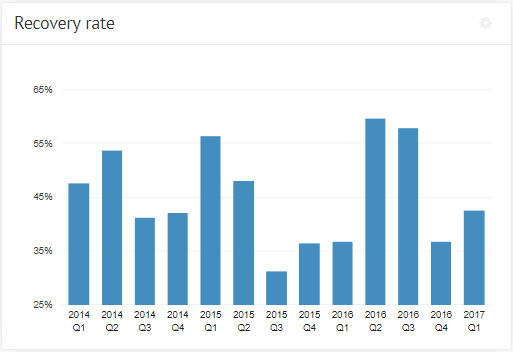 Estonia, Finland and Spain all continue to exhibit relatively stable recoveries as seen by their low standard deviation since Q1 of 2015. For example, the total 2016 averages for each country have not moved more than 6 percentage points since last month. Moreover, for 2017 the total past year averages for Estonia, Finland and Spain have not dropped more than 3 percentage points. The one exception to this characteristic is Slovakia with a drop of 18 percentage points. Higher recovery fluctuations  for Slovakia mostly stem from the fact that the total recovery transaction amounts are significantly smaller and thus changes have greater effect on the recovery rates. However, it’s still possible that the 2015 to 2016 increasing trend of recoveries for the country will continue as 2017 matures.