The holiday season brings joy to all. Yet, it can also bring a great deal of financial stress and worry. Many individuals are trying to shore up their finances before the end of the year, while businesses are working hard to close the year on a high note and beat their sales targets. This creates a chaotic, yet financially beneficial part of the year, where investors can take advantage of historically positive fourth quarter returns.

The Holidays are Good to Investors

The holiday season isn’t just a time of gift giving for children. Historically, this time of year has been good to investors, providing significant market returns year after year. This is the time of year when retail sales shoot through the roof and consumer spending rises, both positive economic indicators that have caused markets to rise.

As it is often stated, past performance is not necessarily indicative of future returns. Still, the holiday season has been extremely good to investors for as long as anyone can remember. According to historical data dating back to 1896, the Dow Jones Industrial Average has gained an average of 2.7% in the fourth quarter versus 1.6% on average for all other quarters. This almost 1% higher gain in the last quarter of the year is extremely significant, and can account for much of investor total gains for the entire year. Additionally, over 79% of the time the fourth quarter produces market returns, much higher when compared to other quarters of the year. 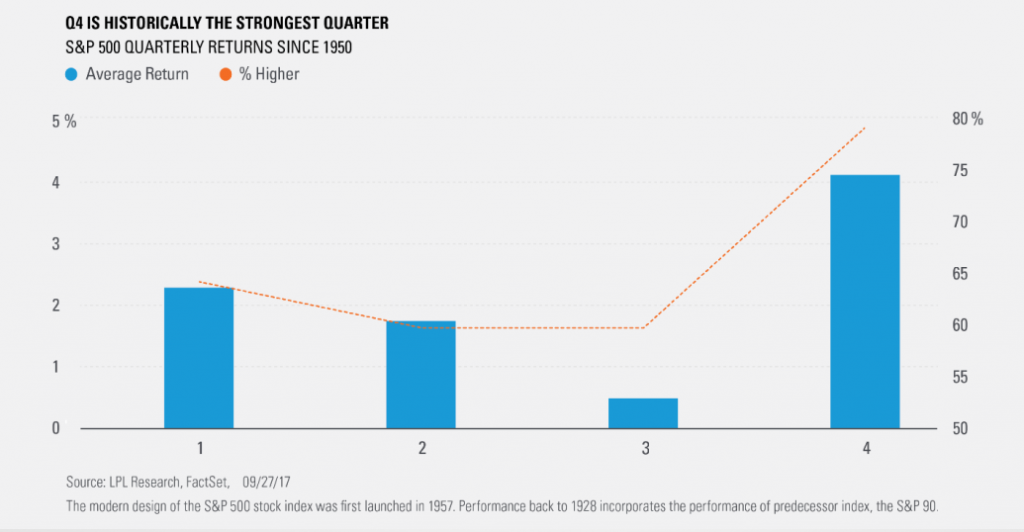 How do Markets Look Right Now?

This year has been a rollercoaster ride for investors. Political turmoil throughout the world has brought about uncertainty, yet, markets maintain on the path forward a decade removed from the 2008 financial crisis.

The year started quite well for stocks. The S&P 500 had its best quarter in five years in Q3, and was up close to 10% at one point. However, stocks have since taken a nosedive to start the fourth quarter. Most major indices are in the negative for the year, and the FTSE is off by more than 12% at the current moment.

Already, December has bucked the trend of great performing fourth quarters historically. In fact, as of mid-December the markets were having their worst December month since the Great Depression.

International markets are concerned about the United States wavering on many of its trade deals. Tim Courtney, chief investment officer at Exencial Wealth Advisors cites this as a concern for the future. “The markets have really favored the U.S. in all of these discussions and really punished international markets unfairly,” Courtney noted. 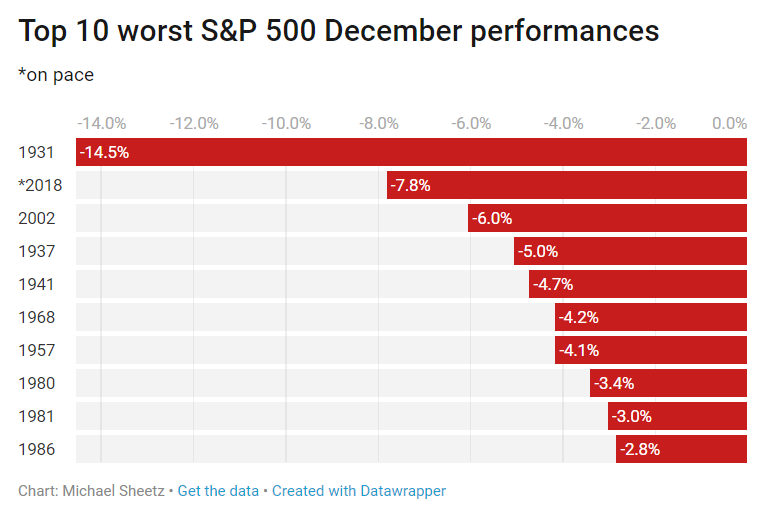 One thing which has been scary for most investors is the steep increase in volatility in 2018. Volatility, as measured by the VIX index, is up 147% so far on the year, with a large portion of the increase coming over the past several months. In fact, at one point early in 2018 market volatility hit its highest levels in over five years.

Volatility is not what investors want to see during the holidays, as uncertainty can lead to panic and bad decision making. If you are ill prepared to weather the storm of market volatility, take a look at investing in stocks with low volatility, or even low-volatility exchange traded funds (ETFs) specifically designed to be more consistent during the market ups and downs.

On the Lookout for Earnings

As the year comes to a close and Q4 earnings are released slowly into the coming year, investors must be on the lookout for a variety of signals to indicate how the markets and their underlying businesses are performing. There is so much information and data to sift through during earnings season. Here are a few key factors to look out for when determining if a business is a good investment.

How does the company fare against its competitors?

Making comparisons should be done for companies in the same industry and markets. A growing company is always a good signal, but if the company is growing at a slower rate when compared to its competitors it can be a potential red flag. Take note of the market competition and if the company is keeping pace with other industry players.

What is the outlook for the industry in the coming years?

Some industries fare better than others in certain economic conditions. If you expect a recession over the coming years take a look at industries and sectors which perform better during market downturns, such as consumer staples and utilities. Additionally, the advent of new technological solutions can make some industries obsolete. Make sure to examine an industry’s long term viability in an ever changing world.

It doesn’t matter if a company is doing billions of dollars in revenue each year, it needs to eventually turn a sizable profit in order for investors to be happy. Yes, there are outliers to this sentiment (as seen in tech giant Amazon who didn’t turn a profit for most of the years it has been in business), but as a general rule, profits matter most.

Don’t Let Emotions Get the Best of You

As mega-investor Warren Buffett once said, “The most important quality for an investor is temperament, not intellect.” What Buffett is getting at is the ease with which many investors lose their cool during tough times, and how important it is to stick with your convictions when investing.

Unfortunately, the holiday season, the impending end of year, can be filled with significant stress for investors. Many investors go into this season with the hopes of a big investment win to save their year, creating a miracle where there is none to be found. This kind of thinking is what gets investors in trouble, overreaching and taking too much risk.

Many individuals look to sell stocks which have been underperforming so as to take a loss and write it off on their taxes. While this is often a good strategy to reduce tax exposure, it can be detrimental if you sell a stock too early before it has recovered. Others take money out of the market to pay for increased expenditures for travel and gifts that come with the holiday season. Again, this short-sighted action can have negative results for investors in the long run.

As Mark Douglas, author of Trading in the Zone, writes, “Ultimately, consistent profitability comes down to choosing between the discomforts you feel when you follow your plan and the urge to let yourself be captures (and ruled) by your emotions.”

The holiday season is about enjoying time with family and taking advantage of the extra time off from work. It’s not a time to start panicking about your end of year finances or how the market will do in the next several weeks.

With this in mind, keep track of how the market is performing and take note of investment decisions that may benefit you in the coming weeks and months. However, also remember to relax into the holiday season, and ensure you don’t get caught up in all of the emotion that the fourth quarter of the year can bring.