In mid-2016 when the UK voted to leave the European Union, the majority of the world was in shock. This unexpected turn of events started a ripple effect which has led to a wavering British economy and more questions than answers. Once the dust on Brexit settles, there could be big changes in the UK economy. While the state of Brexit is still in limbo, there is much to clear-up before the referendum goes fully into effect.

On June 23rd, 2016, 51.9% of the British general public voted in the affirmative on a referendum to exit the European Union. The British were convinced the European Union was not acting in the best interest of the country, and that the UK was effectively subsidizing other countries who were not adhering to the standards set by the governing body. This, set amid a growing nationalist global movement, led the British public to vote in favor of an exit from the EU, beginning the chain reaction of what has come to be known as, “Brexit”.

However, even though the Brexit vote came to pass over two years ago, it has been a slow, laborious process for the nation to exit the EU successfully. Currently, the Brexit process is stuck in the mud, failing to pass the final stages.

Prime Minister Theresa May is working with UK Parliament to design an EU exit plan which would benefit the nation and not completely sever ties from the European entity. May realizes the importance of remaining cordial with her European neighbors which it will need to maintain trade and economic relationships. She is attempting to put together a deal with the EU which will allow the two sides to remain engaged in trade and other economic endeavors.

A vote on the final stages of Brexit by UK Parliament was delayed until at least the beginning of 2019, adding even more uncertainty on what the future holds. It appears UK Parliament believes May’s deal is too lenient with the EU and gives up too much of the country’s sovereignty its citizens voted to obtain with the original Brexit referendum vote. If the next vote is passed by the House of Commons it will go into effect on March 29th. More likely, the agreement could be passed with amendments, after which time the government has 21 days to design a plan of action for the future. 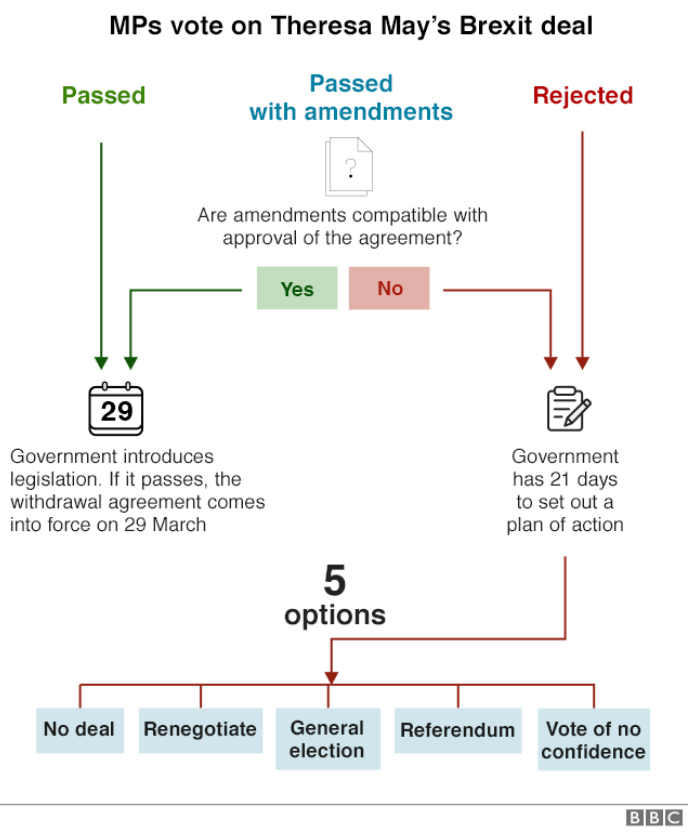 Whether or not May and Parliament reach a deal with the EU or not, Brexit will eventually commence, and in doing so, will result in massive changes in the British economy.

While no one can foresee the impact Brexit will have on the British economy, this is the subject of much speculation. Estimates of UK economic growth vary greatly among experts. However, most agree that at least in the short-term the British economy is likely to shrink as a result of the political move.

When the UK was part of the European Union, it traded with other countries and benefited from a free-flowing economic relationship between EU countries. With its pending exit, Britain will have to look toward other trade partners, and build a good trade relationship with EU-based countries, to maintain its trade balance.

Currently, the United States is the country’s biggest trade partner ($59.2 billion in exports), and it is likely Britain will continue to build on their already strong trade relationship. However, most of the other big trade partners for the country, including Germany and France, could take a massive hit once Brexit comes into full effect.

One of the hopes of Brexit is that it will halt massive waves of immigration in the country over the past decade. Some fear businesses in the country could experience a labor shortage. A study completed by consulting firm Mercer expects the British workforce to grow by 820,000 by 2025, a significantly slower rate than the growth of 2 million in the previous decade.

The question of employment may ultimately come down to whatever deal British Parliament can strike with the EU. A deal which results in access to EU labor will be good for British companies, but negative for UK workers who would still have to compete with their European partners for job opportunities. Alternatively, British workers stand to benefit from a more closed-off country which would become more reliant on employing homegrown talent.

Negative Impact on the Housing Market

In fact, this trend may already be starting, as housing prices in the country fell at their highest rate in six months, down 1.4% in September in further Brexit anticipation. Individual investors and homeowners in the country are wary about the real estate market. “Few households think that housing is a good investment at present,” noted Samuel Tombs, the chief UK economist at the consultancy Pantheon Macroeconomics.

After raising interest rates for the first time in a decade last year, UK rates have been heading back down as Brexit comes into a fuller picture. It is speculated that interest rates could fall to zero. UBS economist David Tinsley noted, “In our view [Brexit] could lower long-run UK GDP by about 3.0% under a scenario in which access is very restricted.” Tinsley went on to highlight the already record low-interest rate of 0.5% which could easily continue to be pushed toward zero if the country’s economy were to stumble.

While Brexit has made all of the headlines, there is concern that the politics of the issue are casting a shadow over a looming recession in the country. The interwoven nature of the politics of Brexit with its impact on the country’s long-term growth and economic outlook cannot be untangled.

What Does This Mean for Investors?

The effect of Brexit on individual investors remains to be seen, but is likely to be large. Historically, the UK represented a financial hub within the European Union, one where jobs and opportunity were vast. A UK which operates outside of the EU could hamper cross-border opportunities for jobs and economic growth for large companies. These factors could weigh heavily on British investors, who may need to look elsewhere to find returns which suit their needs without taking on unnecessary risk.

Brexit could ignite British citizens to begin utilizing p2p services more than ever before. British citizens are likely to have less access to a wide range of financing and lending options now that they are looking at a country more confined to its own borders.

On the flipside, UK investors will be in search of alternative assets in an economy riddled with uncertainty. As previously mentioned, there is concern over a housing market which could fall in the wake of Brexit, and an overall economy which holds more questions than answers. This creates an economic environment which makes alternative investments, such as p2p lending, a solid choice for UK citizens.

Will Other Countries Leave the EU?

The biggest fear from the perspective of the EU is that Brexit will start a snowball effect of countries seeking to follow the lead of the UK and leave the body. In France, protestors are calling for their country to exit the EU in direct opposition of its president Emmanuel Macron.

It is unclear whether Brexit will work in favor of the UK, or if its choice to become more independent will eventually backfire. Other countries will be keeping a close eye on the aftermath of Brexit when attempting to broach the subject of ejecting from the EU.

Meanwhile, back in the UK, the country’s government, and its citizens are on edge, waiting to sort through a messy two years which will shortly be reaching its climax. All the British can do is march forward, hoping their instincts of disengaging with the European Union proved to be fruitful in the end.