With the holiday season coming to an end, it is time to examine returns for the Bondora portfolio of peer-to-peer loans. As always, performance charts by country are broken down by number of loan issuances over the given time period, with Orange representing <50 loans, Blue 51-200, and White >200.

Loan issuances should always be taken into account when analyzing any return information for a given period of time, as fewer loan issuances can often result in skewed, and often unreliable, data.

Yearly return results for Spain continue to look positive over the past four years, consistently beating target numbers and generating a significant turnaround from negative returns from 2013 to 2015. 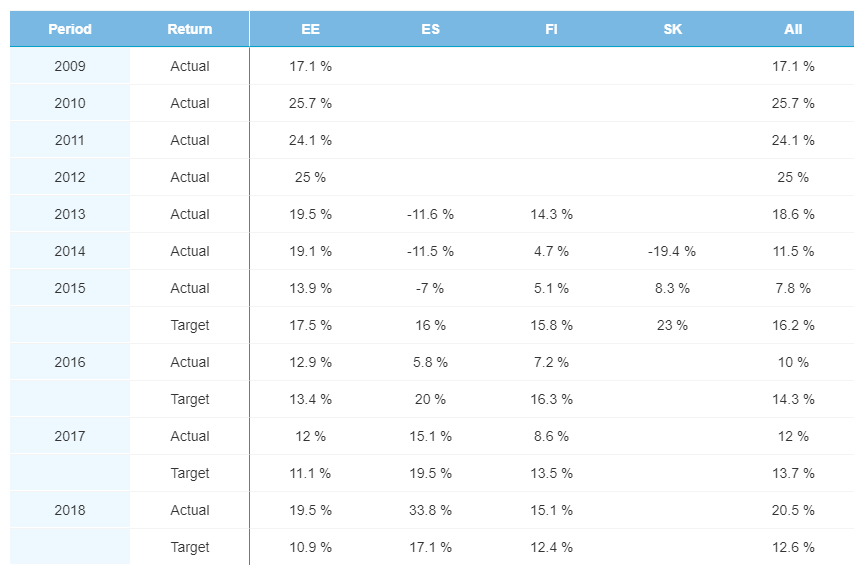 It is best to examine Finnish loan returns in categories with enough issuances over time to find trends, such as D and E rated loans. These categories have performed better than expected over the previous two quarters, while also performing well historically. Q2 of 2017 brought significantly better returns for D rated loans of 18.17%, 5.6% above their expected target. 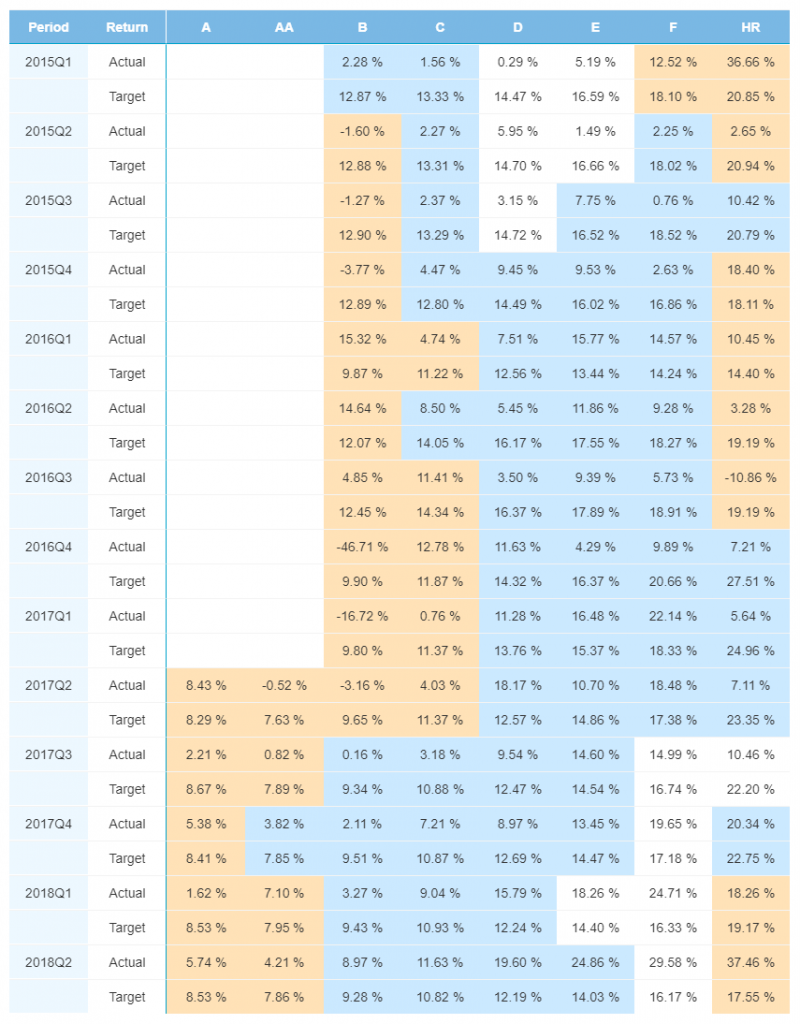 Bondora issues most of its loans in Estonia, providing the largest, and therefore, most reliable data set to examine returns. Returns on Estonian loans were very solid across the last three quarters of 2017, with only 5 out of 20 categorical returns during that time coming in lower than target estimates, and those that did miss targets only did so by less than a 2% variance. Returns in 2015 are double digit across the board, signifying long-standing stability for Bondora loans issued in Estonia. 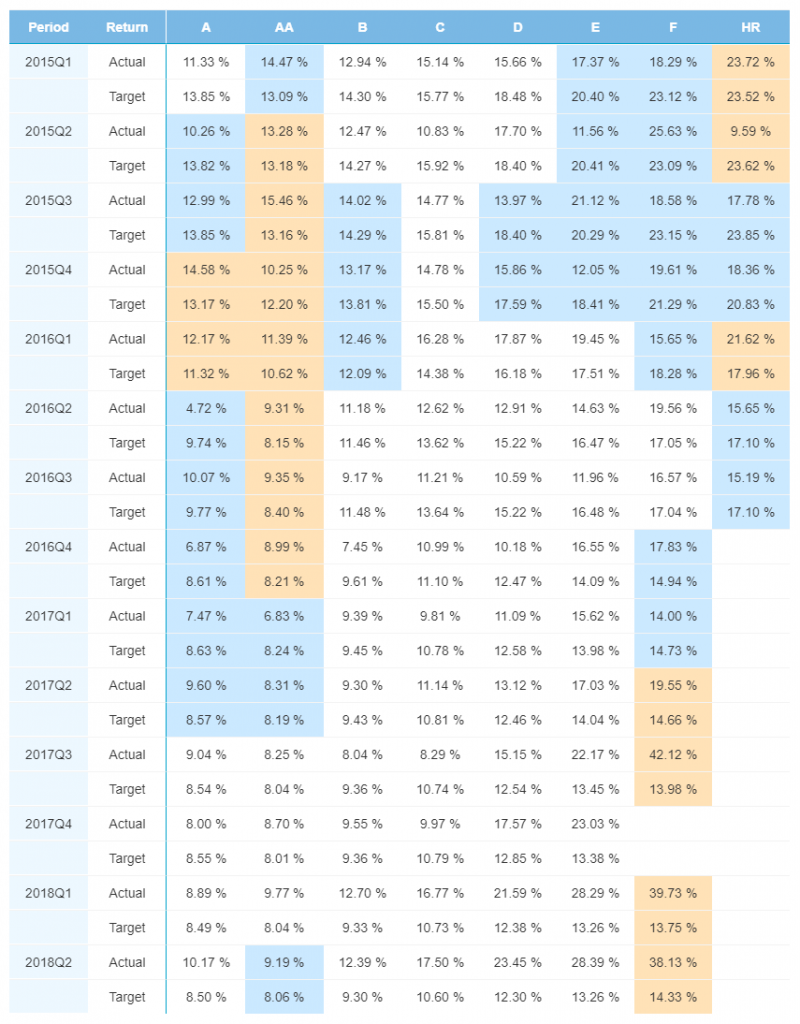 Spanish loans maintained their return levels, doing so for loans mostly issued in lower rating categories. Excluding HR rated loans, the highest loan returns in Spain occurred in Q1 2016 for E rated loans which returned 37.26%, a whopping 22.65% above their targeted return. However, the total count of loans and EUR amount here is much lower than the other markets. 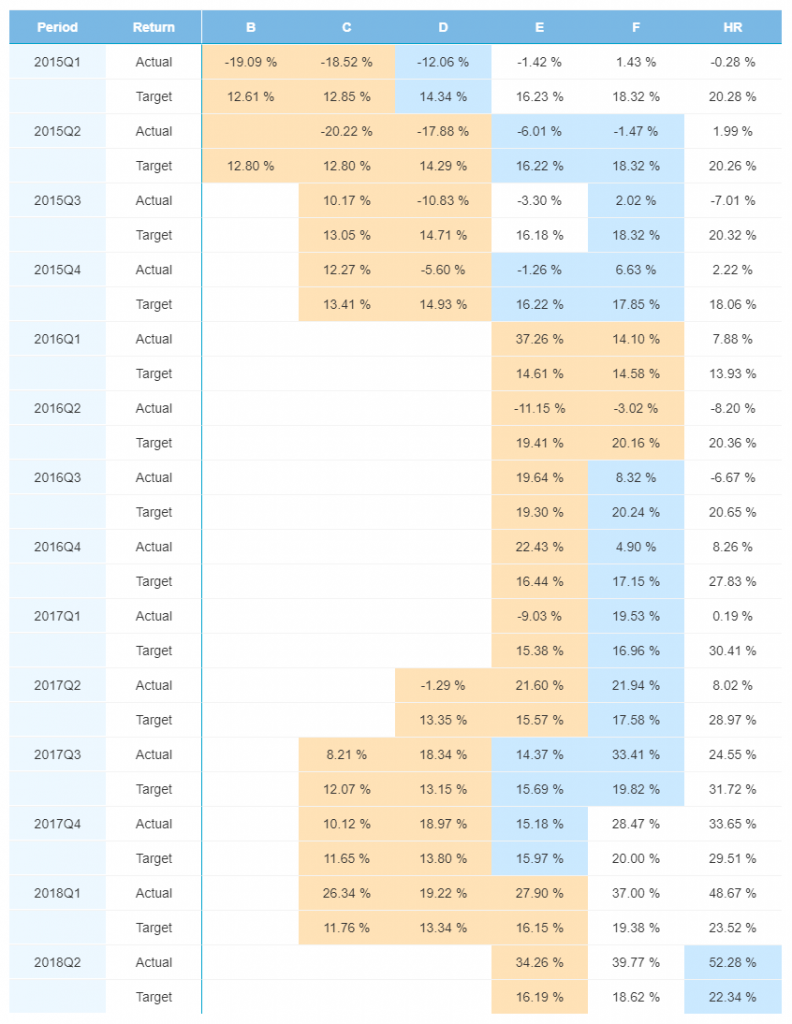 Economic News on the Horizon

The continuing Brexit saga is expected to affect the entire European Union. It appears no deal with European Union is going to be reached in the coming weeks, and therefore, it may take until the March deadline for the two sides to come to some sort of an agreement, or Britain will exit the EU on their own.

There is worry of a impending global economic recession which threatens to damage the growth of nations around the world.

Extremely positive news out of Finland, where the country’s government is set to cut its debt in the 2018 calendar year by 0.9 billion euros. This is a historic moment for the Finnish government, which hasn’t been able to accomplish this feat in a decade. Finance Minister Petteri Orpo commented, “Finland will be able to reduce debt for the first time in 10 years… This temporary turn is a significant thing psychologically.” This points to a Finnish economy and government which is set up to perform well on the global stage moving forward.

The Bank of Estonia expects its country’s growth rate to remain constant in 2019, yet begin to slow in the years thereafter. Reasons for this expected slowdown include an increase in the cost of labour as a result of labour shortages in the country, which are causing an increase production costs. An upcoming election in the country set for March will be a tell-tale sign of how Estonians feel their economy is faring. Leader of the liberal Reform Party, Kaja Kallas, noted the importance of promoting economic stability in the upcoming election. “Although public debate has been addressing other topics in recent days, we continue to be convinced that the main topic for these elections is whom the people of Estonia will entrust with leading the country in matters of taxes and the economy in the coming years,” said Kallas.

After rejecting a trade deal with China last month, Spain has agreed to a deal with China on exporting a wide range of products to the far east. This includes, most notably, pork, which China is the biggest consumer of in the world. Although the country’s economy is not growing as fast as other European nations, it is still in a growth phase, with the Bank of Spain expecting 0.6% growth in the fourth quarter of this year.