The year ended with a positive bang for Bondora loans. We are originating more loans across all countries than ever before, and most origination data points to a stronger portfolio of Bondora loans.

More Loans to End the Year

With €8,448,570 in total loan originations in the month of December, Bondora not only ended the year strong, but broke its record for most loans originated in a single month. This also represents a jump of €554,497, or 7%, from issuances in November.

Finnish loans continue to be the most issued for Bondora after overtaking Estonian-based loans last month. These shares have not changed significantly over the previous month, as Spain accounts for even less of the total loans issued, coming in at only 1.56% of all Bondora loans.

The average loan amount in Spain and Estonia dropped from November to December, with Spain’s decrease in average amount down by €393, more than 20% compared to the previous month. Meanwhile, loans originated in Finland grew once again, eclipsing the €4,000 mark to reach an average of €4,007.

The average age of Bondora borrowers remained relatively the same as compared to the previous several months. There has been no significant change to note in the average age of these borrowers, which remains in the low 40s in Estonia, mid-40s in Spain, and upper-40s in Finland.

Borrowers in both Estonia and Finland acquired loans for the same duration length, on average, when compared to previous months. However, loan durations dropped in Spain, where borrowers obtained loans for an average duration of 40 months, a full 6 months less on average than in November. 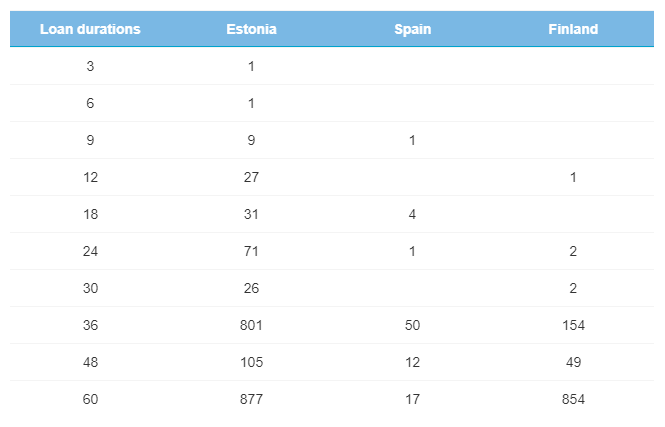 When this data is broken down even further to individual loan durations, there are not many surprises. There continues to be a trend moving away from short-term Bondora loans, with a negligible amount of loans issued less than 12 months across the board. Finnish loans still skew heavily to 60 months, where more than 80% of the country’s loans are issued. Loans in Estonia are almost equally split between 36 months and 60 months, with only 14% of loans issued outside of those periods. Spanish loans also trended toward longer durations, with almost all loans issued between 36 and 60 months.

Incomes for borrowers rose across the board this month, giving investors a big sign of optimism for the future of loan repayments. The biggest change to note came in Finland, where borrowers made an average of €3,896 per month, €967 (or 33%) more than the prior month. Incomes in Spain and Estonia did rise as well, coming in at 8.6% and 5.6% higher than in November.

Correlation Between Home Ownership and Education

A correlation can be found in the education level and home ownership status of Bondora borrowers. In Estonia, where a significant portion of borrowers are homeowners, the education of the same borrower’s trends toward higher levels. Over 73% of borrowers in Estonia have either a high school or university level education.

Verification Can Be a Signal

Not only have there been more loans issued in Finland over the past several months, but these loans have also gone to verified Bondora borrowers. Unlike borrowers in Estonia, where only 38% of borrowers are verified, 68% of Finnish borrowers are verified by Bondora. Keep in mind, while verification doesn’t guarantee faster or more likely repayment from borrowers, it does represent another check for Bondora and its investors.

With over €174 million invested by more than 46,000 people, we at Bondora are looking to build on a successful 2018. We have spent the last year ramping up our loan offerings and providing investors a wider array of investment opportunities, such as the simple and efficient Go & Grow investment option. Look for us to do more of the same as we start a promising 2019. As a new year begins, we are working even harder to maintain our strong portfolio of loans, while at the same time offering investors a range of investment products and options to fulfill their needs.